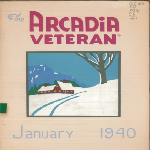 
Arcadia Camp was occupied by the 1116‐V Company, so named because unlike its predecessor (1188th Company) its membership consisted of military veterans. We know some details about it from a set of newsletter‐type publications called The Arcadia Veteran produced by enrollees at the camp. Newsletters were common at many camps across the country. They consisted of practical information such as activity schedules, inspirational essays, as well as stories, jokes, and other news about camp life. Additionally they provided an opportunity for the men to learn some practical skills in writing and production. A typical issue of The Arcadia Veteran contained about 30 pages of mimeographed copy with a silk‐screened color cover displaying art work depicting a theme appropriate to the month – for example, Mother’s Day for the May issue and Veteran’s Day for November. Circulation of these publications generally was scaled for the size of the camp, although copies found their way home and out into the local community.

From the Series: English